The Patriot Resource > Film > General Movies > Pirates of the Caribbean

Pirates of the Caribbean Film Trilogy


From Amazon:
With the adventures of Captain Jack Sparrow (memorably portrayed by Johnny Depp) earning legions of fans right across the globe, the Pirates of the Caribbean trilogy has proven to be one of the most popular series of films in recent times. Fortunately, there's good reason too.

The trilogy starts off with the best of the three films. The Curse Of The Black Pearl is a superb piece of blockbuster movie making, delivering lots of laughs, some fabulous set pieces and a core of good, old-fashioned swashbuckling action. With a terrific supporting cast, led by the likes of Geoffrey Rush, Orlando Bloom and Keira Knightley, its running time simply zips by in a flash, and there's plenty of incentive to hit the play button again once the credits roll.

The second movie in the series, Dead Man's Chest was more commercially successful, but it's not quite as strong a film. Nonetheless, there's still plenty to enjoy, including Bill Nighy's stunning Davy Jones (the special effects there are something to behold). And it earns extra bonus points for a terrific final twist in the end reel.

And then we arrive at the closing part of the trilogy, At World's End. This is arguably the most bloated, with a nigh-on three hour running time, but it does pack a lot in. Multiple Johnny Depps for starters, along with some terrific action too.

While the three parts of the Pirates of the Caribbean trilogy may thus be a little uneven, its nonetheless a collection of films with plenty to recommend. The first part sails away with the top honours, but there's little doubt that all three are set to entertain audiences for many years to come.


Click below for more information on
The Pirates of the Caribbean Trilogy:
- Curse of the Black Pearl
- Dead Man's Chest
- At World's End

The Curse of the Black Pearl:
2-Disc DVD
UMD for PSP
Soundtrack 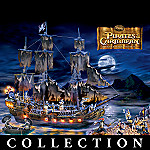